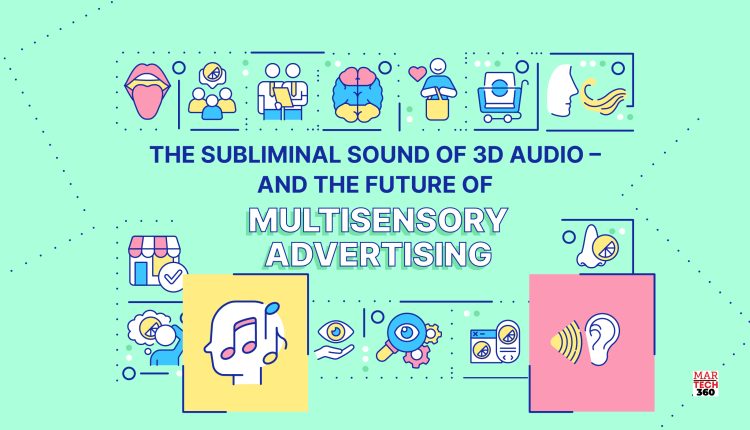 Earlier this year, Transport for London (TfL) used 3D audio to make its campaign against sexual harassment on public transport immersive, more realistic, and ultimately, more powerful. The campaign soundscape, which incorporated on-the-spot recordings of the underground, relayed the realities of travelling by public transport in London – which for many includes harassment.

The campaign made headlines for both the innovative use of sound and for using podcasts, such as Chris Sweeney’s Homo Sapiens, as an integral part of the communication strategy. But when both audio ads and podcast listeners have been hailed for high engagement, is it much of a surprise that using the two in conjunction is a potent combination? Make it 3D, and you take your advertising to the next level.

This brings us to the next question: what does 3D audio actually entail, and how can advertisers wield it?

19th century biomimetics and the sound of the future

Audio ads are said to produce higher levels of engagement – increasing long-term memory encoding by 36% and emotional response by 39% compared to stereo ads. Additionally, podcast listening is said to draw in a highly engaged and receptive audience, with 67% of listeners claiming they are attentive to ads – 20% more than TV audiences (46%).

When it comes to 3D audio – which despite its new age feel was originally conceptualised over a century ago – the recording and listening experience aim to replicate the human hearing experience. Instead of traditional mono (recording through a single microphone) and stereo (which uses two), 3D audio is produced with a specific binaural sound system. These two microphones are placed on either side of a rubber head and the sound recorded through separate channels, after which specific software adds the particular variations that occur when the ears signal sound to the brain. The technology works especially well when heard through headphones.

The Global 3D Audio Industry Report predicted the global 3D audio market to reach $13.7 billion industry by 2027 (roughly £12 billion), with investments speeding up alongside AR/VR developments to ensure entirely immersive experiences. As we can see with the TfL campaign, the uses of 3D audio extend into media campaigns, film, music installations, and gaming.

3D audio maps out a mental soundscape for the listener, where some elements will feel closer or further away, building a highly immersive experience. Added to that, sound is visceral, activating different areas of the brain to create meaning, trigger emotions, and set memories. These factors alone make 3D audio a fantastic way to truly connect with audiences in a personal and intimate way, making it enticing to advertisers.

And indeed, with the UK podcasting era “on the cusp of a golden age” and advertising revenue to hit £64 million by 2025 – 16 times higher than in 2016 at £4 million – it’s clear that the medium is finally catching up with listening habits. These habits also reveal more about consumer likes and dislikes than traditional radio, which reduces the possibility of out-of-place and unwanted ads and improves targeting and personalisation.

Seeing as how podcasting is not the only headphone-activity – think of the popularity and ubiquity of mobile and video gaming – 3D audio is far from a one-trick pony. When we consider this alongside other changes within industry – Netflix is expanding its offering to include gaming, while TikTok is breaking the trend of sound-off adverts – it becomes clear that what we are witnessing is an exciting time of hybrid, immersive listening where audio plays a key role across a number of media.

Charting an audio pathway through the noise

If brands want to get it right, they need to do more than just use a different kind of technology. To create an immersive ad, you yourself need to immerse yourself into the habits, experiences, and behaviours of your target audience. This is storytelling that plays on the senses, and it needs to integrate seamlessly into their environment.

When it comes to advertising in podcasts, you must consider the contextual environment of the ad so it does not interrupt the listening experience. Fortunately, programmatic advertising includes pre-, mid-, and post-roll ads, which helps avoid abrupt intrusions. This is also true for gaming applications. For example, puzzles can afford mid-play ads, whereas combat games would need an ad triggered on intermission or high score – because no ad, no matter how immersive, would be received well if delivered in a moment of high-pressure mid-play.

This thoughtfulness also needs to extend beyond the where and into the how. Taking notes from Mastercard’s sonic branding adapts to the listener’s geographic location or Singapore Airlines crafted different sounds to different stages of a consumer’s journey, brands will have to learn how to use 3D audio, taking the listener’s context into account and enabling true immersive storytelling. This includes culture, circumstance, and location, and it’s why TfL used the iconic “Mind The Gap” audio in their 3D campaign rather than the sound of New York turnstiles.

3D audio enables ultimate creativity and the ability to craft a multisensory, narrative experience that is unique to your brand and emphasises the importance of your product through subliminal sound – make the most of it.

Michal Marcinik is the CEO and Founder of AdTonos. He is an audio geek who aims to create a consumer-first audio advertising experience with Adtonos as he believes that consumers want better, less disrupted content experiences.

Everyone’s a data analyst: The fight for attention in a world of information overload