Viewability vs engagement: how advertisers can optimize attention to boost campaign success 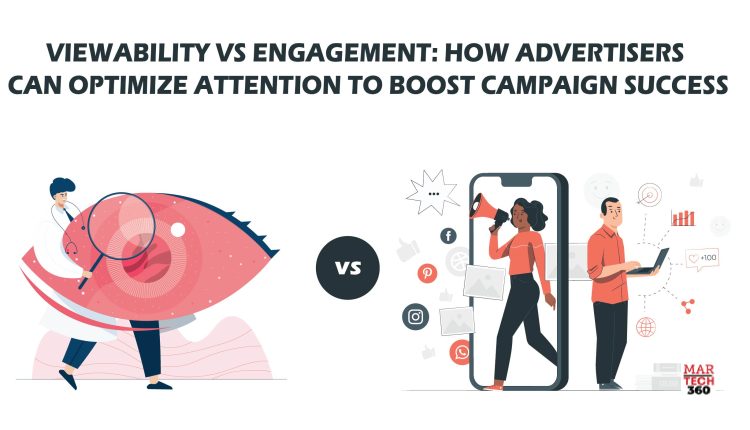 For years, the digital advertising industry has relied on inaccurate measurement methods to determine campaign success. Proxy metrics such as clicks and impressions, for example, reveal nothing about a consumer’s actual engagement with an ad, making it impossible to attribute subsequent action to that creative.

Throughout the search for more effective methods, attention metrics have emerged as a viable solution, measuring consumers’ interactions with an ad rather than simply whether or not it has been seen. By gaining a better understanding of what consumers pay attention to, advertisers can create more effective ads and increase ROI. So what elements do advertisers need to consider when aiming to capture their audiences’ attention, and which ad formats are the most effective?

An ad shown is not an ad perceived

In today’s crowded digital landscape, consumers are exposed to between 6,000 and 10,000 ads a day, meaning advertising fatigue has become a significant problem. According to a Blockthrough survey, 81% of US ad blocking users said they do so to avoid disruptive or irritating ads, while other research has shown that 74% of consumers feel bombarded with ads. In this climate, advertisers need to adjust their strategy, striking the right balance between quantity and quality to not only reach audiences, but connect with them.

After all, just because an ad has been viewed, it doesn’t necessarily mean its prompted engagement. This is why attention metrics are gaining more traction over outdated, traditional measurement methods.

It has been found that attention is three times better at predicting outcomes than viewability. A study conducted by Trinity McQueen and London School of Economics found that 72% of ads analyzed showed a strong correlation between attention and the final performance metrics. In short, the more attention paid to an ad, the more successful the campaign outcome.

Much like human behavior, attention is complex, and consumers rarely pay full attention to ads. They don’t need to, either. Even a small increase in attention can lead to a significant boost to ad awareness and recall.

The ad format advertisers choose, and the environments in which they are placed, can make a huge difference to brand awareness and consumer connection. There are some formats that outperform others when it comes to attention, so experimenting with different types can help brands find the ones that work best.

Native widgets are a great way to reach highly-engaged audiences in online publisher environments with ads relevant to the content being read. These non-disruptive formats integrate seamlessly into the text, so they’re less irritating than other formats, and users are more likely to pay attention to them as they’re contextually relevant.

In-content impact widgets can be placed using AI technology that ensures ads are positioned where they’re most likely to be noticed. The AI can be trained to do this using data from page views; it analyzes optimum placements based on how users have engaged with content previously and what captured their attention the most. Smart widgets are another effective option; they track users’ line of sight to ensure ads are placed in front of them without disrupting the overall experience.

With the increasing popularity of online video in general, it’s no surprise that video ads receive high levels of engagement, with research showing mobile video ads generate more attention than static ones.

However, they can be costly to create, so advertisers looking for a more affordable alternative could consider motion ads. They rely on gifs or MP4 video files, producing the eye-catching video effect with less strain on resources.

Taking the dynamism of video a step further, research has shown that interactive ads boost campaign performance; they’re more effective at drawing consumers’ attention as they often require action from users themselves to be viewed in their entirety, arousing intrigue. Interactive ads can encompass 360 degree or panoramic ads, which encourage users to swipe or drag creative to reveal more details. Similarly, Flip Parallax ads flip between images to unveil alternative designs and messages, while carousel units rotate horizontally to show audiences a range of products.

The importance of context

When designing ads to attract maximum attention, it’s important that creative is optimized for devices. So, simpler ads for smaller smartphone screens, for example, with minimal text and engaging, interactive content. Using contextual targeting, whereby ads are delivered in the most relevant environments for creative, can also boost campaign performance.

The global contextual advertising market is predicted to grow to over $335 billion by 2026, and because it targets the page on which it appears rather than individual users, audiences tend to have a more favorable view of them. Research has shown that 72% of audiences somewhat like contextual ads, and are more likely to click on them than those employing demographic or behavioral targeting.

Traditional proxy metrics are no longer fit for purpose; if advertisers want to optimize performance, they need to tailor their creative towards the ad formats, designs and features that will generate the most attention. By producing ads that are not just eye-catching but which are also intelligently placed, brands can ensure that their creative is perceived well and remembered. Most importantly, they can better deliver ROI.

Sergii Denysenko is the CEO of MGID. Santa Monica-based MGID is one of the first native performance advertising platforms worldwide. Our platform serves thousands of publishers w/billions of news stories, all while delivering marketing solutions for advertisers that key into consumer interests without disrupting their online experience.

Customer Experience is the Next Battlefield: National Study Led By Jason Dorsey and…