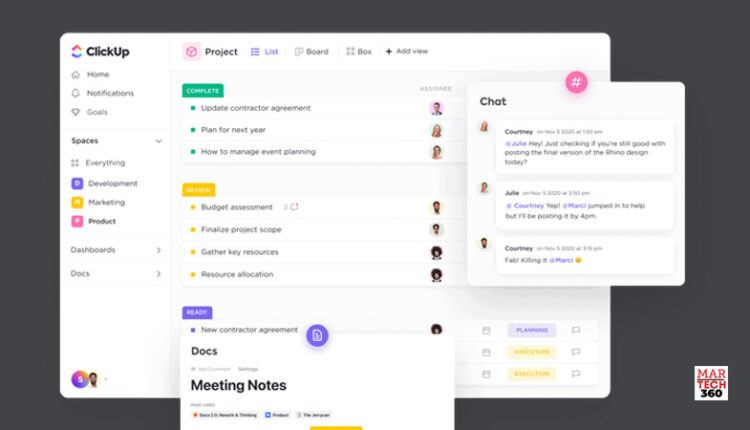 ClickUp, the world’s only all-in-one productivity platform, revealed its official ad that will air during Super Bowl LVI on Sunday, February 13.

“Declaration” features a bold and humorous take on the signing of the Declaration of Independence, and highlights how having all of your work in one place makes the world more productive and saves people time in any century!

The ad was conceptualized and created entirely by ClickUp’s best-in-class, in-house creative team, led by Melissa Rosenthal, the company’s Chief Creative Officer. Under her leadership, ClickUp has led the way for software and tech companies — especially startups — entering mainstream advertising. The company was recently ranked as one of the top 100 companies to invest in out-of-home advertising alongside Amazon, Apple, Facebook, and GrubHub, and debuted their “Returning to Work” campaign, a comedic six-part video series, in August 2021.

“ClickUp has made advertising a key priority over the past year in an effort to build an authentic brand voice that illustrates the benefits of ClickUp in a relatable, human-centric, and humorous way,” said Melissa Rosenthal, Chief Creative Officer at ClickUp. “This commercial is a natural progression of our overall advertising strategy and the large investments we’ve made in out-of-home advertising to-date. We’re excited by the opportunity to amplify the voice we’ve developed on the biggest national stage.”

ClickUp’s Super Bowl ad comes on the heels of several milestones for the company. Debuting an ad of this caliber is a testament to ClickUp’s hyper-growth and success. In less than 18 months the fast-growing startup raised $535 million in funding, including a $400 million Series C round in October 2021. In the last year, ClickUp has tripled its revenue and grown its user base from 200,000 to 800,000 teams worldwide, including teams at McDonalds, Booking.com, Papa Johns, and Netflix. The company also recently launched several new innovative products as part of its all-in-one productivity platform, including a fully revamped version of ClickUp Docs and an all-new product Whiteboard, a powerful visual collaboration space that helps you visualize ideas and turn them into actions with a click of a button.