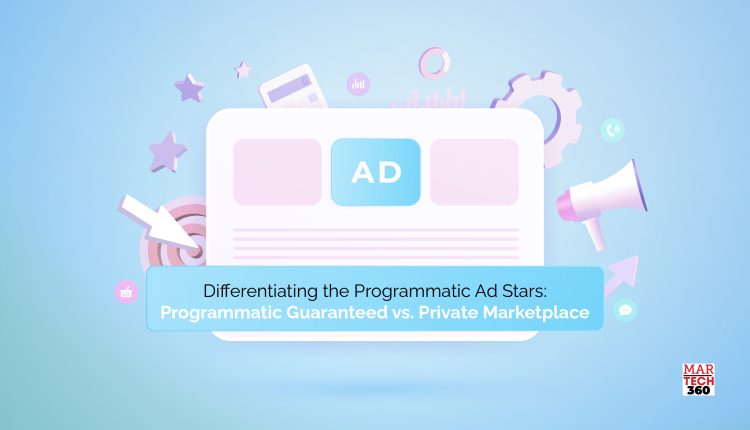 Did you know that Programmatic Advertising is a Martech constellation?

Well, let me explain. We have heard several terms in Martech floating around such as preferred deals, programmatic direct, programmatic guaranteed, private marketplace, and many more. These are your top marketing stars! These stars are what make your Programmatic Advertising bunch impact the audience.

In the USA alone, programmatic ad expenditure reached over 219 billion in 2022. Programmatic advertising helps advertisers save time and money while expanding their reach and earning more money than traditional advertising, which is carried out manually or through one-to-one deals.

Today, the focus is on two of the most important components of our constellation aka programmatic guaranteed and private marketplace (PMP)

What is Programmatic Guaranteed?

With programmatic guaranteed, a publisher can predetermine the number of ad impressions that a buyer or advertiser will receive for a predetermined fee. On rare occasions, the publisher and the buyer will agree to a price for the predetermined number of impressions. The volumes and pricing, however, are assured for both parties after they have been agreed upon. This procedure mimics standard media buying, but as you’ll see in the paragraphs that follow, its automated nature offers extra advantages.

Why use Programmatic Guaranteed for Your Campaigns?

A programmatic guaranteed deal can be initiated by both advertisers and publishers. Publishers can use Google Ad Manager to develop a proposal and distribute it to appropriate advertisers. Interested advertisers can review the proposal and the inventory before making a final selection.

On the other hand, advertisers can research various publishers and get in touch with them to discuss a programmatic guaranteed arrangement. The advertiser receives a deal ID from the publisher once the agreement is finalized and the publisher agrees to reserve inventory for that specific advertiser, enabling the advertiser to display their advertising.

Advertisers get access to premium inventory through programmatic guaranteed which are not available on open marketplaces. Additionally, guaranteeing impressions eliminates the requirement for a buyer to place bids.

Additionally, programmatic guaranteed enables advertisers to pinpoint the precise locations where their ads will run. They can choose the publishing sites, in other words.

What Is a Private Marketplace (PMP)?

It is the exclusive elite club of programmatic advertising.

Why use a Private Marketplace for Your Campaigns?

Publishers have control over which customers have access to premium merchandise since they get to choose which purchasers are accepted to the private marketplace. Publishers can sell whole inventory packages at a lower cost thanks to PMPs.

Top advertisers are in great demand for premium, high-performing inventory due to the rise in brand safety and other quality concerns like viewability. As a result, there will be more competition in your exclusive market and your impressions will cost more money.

You can find out who is purchasing your packages so you can provide them discounts and first-look rights. They are effective enough to occasionally take the place of a highly costly sales crew using technology.

When differentiating Programmatic guaranteed vs. PMP it is important to keep in mind that both are exclusive in their own way. Programmatic guaranteed deals are formed directly between two parties as opposed to PMP transactions, which are developed within a marketplace of other marketers. As a result, PMP transactions are more private than RTB auctions, but they are not as private as talks that are guaranteed to be one-on-one.

Programmatic advertising comes in a variety of forms, including programmatic guaranteed and private markets. As a result, the procedure for purchasing inventory, selecting the appropriate audience, and displaying advertisements are entirely automated.

Although there is a key distinction between the two models. A private marketplace transaction does not result in a one-on-one agreement between the advertiser and publication, in contrast to programmatic guaranteed. Instead, a publisher invites a restricted group of purchasers to participate in an invitation-only auction to bid on available inventory.

In a private auction, which is also known as an auction with a base price set by the publisher beforehand, the advertiser with the highest bid wins the auction and purchases the inventory.

It’s important to note that PMP does not mandate that publishers reserve inventory for specific advertisers or guarantee a certain quantity of impressions. It is therefore perfect for new or small publishers who haven’t yet built solid relationships with marketers.

In conclusion, programmatic guaranteed and the PMP model does, despite their differences, have some things in common as mobile advertising solutions. For instance, both models utilize the same ad exchange technology and are based on real-time bidding. Advertisers can target audiences based on their first-party data in PMP and programmatic guaranteed. Additionally, in both models, brands only pay when a user views your advertisement.

Nevertheless, there are a number of really significant distinctions between PMP and programmatic guaranteed. To begin with, advertising is like the improved income generated by private deals when using PMP. The entire transaction is made considerably simpler by the direct contact and enhanced openness between publishers and advertisers. Additionally, publishers appreciate having more control over the kinds of ads that are shown to website users.

Your organization can create long-lasting business ties to maximize your ad revenue by combining the appropriate programmatic deal types with the appropriate software platforms.

Suchita is a professional content writer prominently experienced in domains pertaining to Market Research, EdTech, and B2B2C. Her recent work covers technology, innovation, and anything trendy in the industry delivering what's hot in the market. With her passion to read fiction, and write on innovation, she creates the perfect blend for content that resonates with market leaders with a hint of creative approach.

She has successfully executed content strategies, developed editorial services and pioneered feature pieces for her clients. Today, her passion towards her work enables her to craft her skills into today's B2B content syndication propelling B2B strategies on a global scale. When off the clock, she likes to spend her days lazing around with her novels or questing around for good food.

Boxed, Inc. Announces Up to $20 Million of New Financing