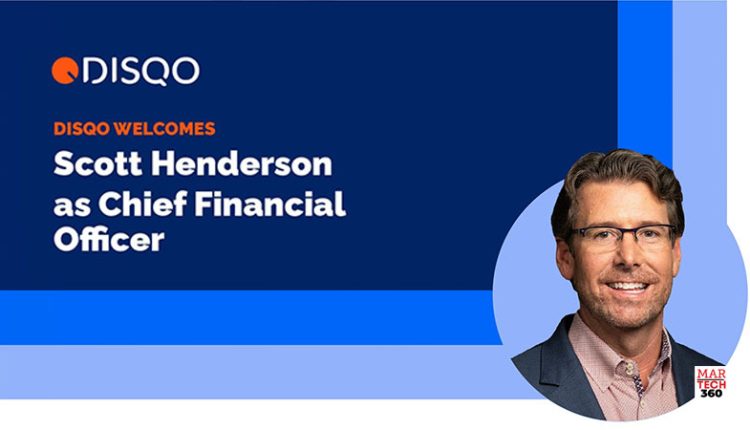 Henderson joins DISQO following 20+ years at Salesforce in roles spanning revenue operations, financial planning/analysis, and controllership, including 7 years building out and leading the EMEA and International Finance function. As EVP of Global Revenue Operations, he led financial strategy and oversaw a team of over 600 employees in 13 countries. He joined Salesforce as an early startup in 2002, and played a pivotal role growing the company into the global enterprise of 75,000+ employees that it is today.

“Scott’s financial management experience in tech at Salesforce, combined with his impressive track record scaling companies into global enterprises, makes him the ideal person for DISQO,” said Adjemian. “As more brands turn to DISQO to power data-driven decision making with their customers at the center, Scott will be instrumental in capitalizing on our growth opportunities to deliver more value for our customers and stakeholders.”

In addition to his time at Salesforce, Henderson has held a series of leadership roles at other high-growth startups and global companies like Apple, Hexcel Corporation and APL. He has an impeccable reputation as a growth-driving finance executive adept at building strategies that have scaled companies from $25 million to $30 billion in revenue.

“In today’s environment, as companies look for more efficiency and uplift from all of their customer decisions and touchpoints, DISQO is well positioned to thrive beyond the current macroeconomic challenges,” said Henderson. “I look forward to working with the team and the Board to amplify DISQO’s impact in the CX space, and to help shape and scale the company for the future.”

DISQO has had a banner year bringing in innovative leaders to help sharpen its offerings and scale the business. Leadership appointments this year include: Nicholas Weaver, Vice President of Engineering, Andrew Duke, VP of Product, Consumer Applications, and David Squellati, General Counsel.